Darren & Darren were married at the beautiful Maes Manor in Blackwood, South Wales in August 2018

Occasionally you get asked to film a wedding for a long-time friend. This was one of those occasions! I have known 'Little Darren' for about 15 years - through holidays in Gran Canaria and through Darren's involvement with Maspalomas Pride - for many years he was part of the e-sensual Dance Company - the group of dancers who performed with many of the artists appearing on stage - in the shows that we filmed! Over the years we became friends as we returned to the island year after year.

'Little Darren' and his partner 'Big Darren' were getting married... and they came to us to provide them with film and photos of their special day.

This was one of those weddings I was looking forward to working on... a chance to meet up with old friends, and to capture some amazing memories for them. Sean, Jack and I travelled down from Liverpool on the morning of the wedding, meeting up around the corner from where 'Little Darren' was getting ready in Barry, South Wales.

As the film begins Darren and his entourage are enjoying the fun of not getting ready for their special day... partly because the night before the wedding 'Little Darren' managed to severely injure his ankle causing it to swell up and make walking difficult! Darren, the twins, his Aunt and various other members of the wedding party entertained us for ages - it has to be said that both of his aunts were totally hilarious - and stole the show!

As the preparations sequence continues Darren's Mum arrives with breakfast - which has egg on it... Darren is allergic to egg - eating that wouldn't be good at all!

We head over to Llanbradach where 'Big Darren' is already in his wedding suit, his family and friends are gathered and are ready for their photos - we follow the goings-on as they finish off their last minute preparations... and then we all head over to the beautiful Maes Manor in Blackwood - which is where all of the main events of the day are going to play out.

The action switches back and forwards between the two Darrens and their guests as the ceremony approaches - Toast Master Ron takes control of the events, the Registrar arrives and prepares for the ceremony - and with the guests in their seats it is time for the ceremony to begin... and Darren & Darren are soon married.

Part Two of their film picks up as they leave the ceremony room and go for their photoshoot with Jack... it has to be said that the weather had turned against us... it was cold, wet and windy - but standing outside under the huge tree in the grounds allowed Jack to get a whole bunch of photos.

Back inside Maes Manor the function room had been turned around... it was time for the wedding breakfast. Toast Master Ron welcomes the boys into the room and everyone takes their seats for the speeches - which were completely perfect for their wedding day - best man Matt wowed everyone with the 'Message from Hyacinth Bucket' - it really did seem like Patricia Routledge was on the telephone!

Ron then invites Darren and Darren to cut their wedding cake... and next on the film comes a whole series of messages from their friends and family... and then part two finishes off with a chat with both Darren's about their wedding day so far.

Part Three picks up at the evening function. The room is set, the lights are on and the magnificent Dame Marcia Bassey-Jones takes to the stage - their evening party featured a full-on cabaret show. Also performing were the amazing Chris Hughes and Kathleen Jenkins - Darren's friend and Britain's Got Talent star. Finally a 20 minute recap of the day rounds off their film.

What a day. What an AMAZING wedding to film and edit - a brilliant memory for them to carry forward in life. 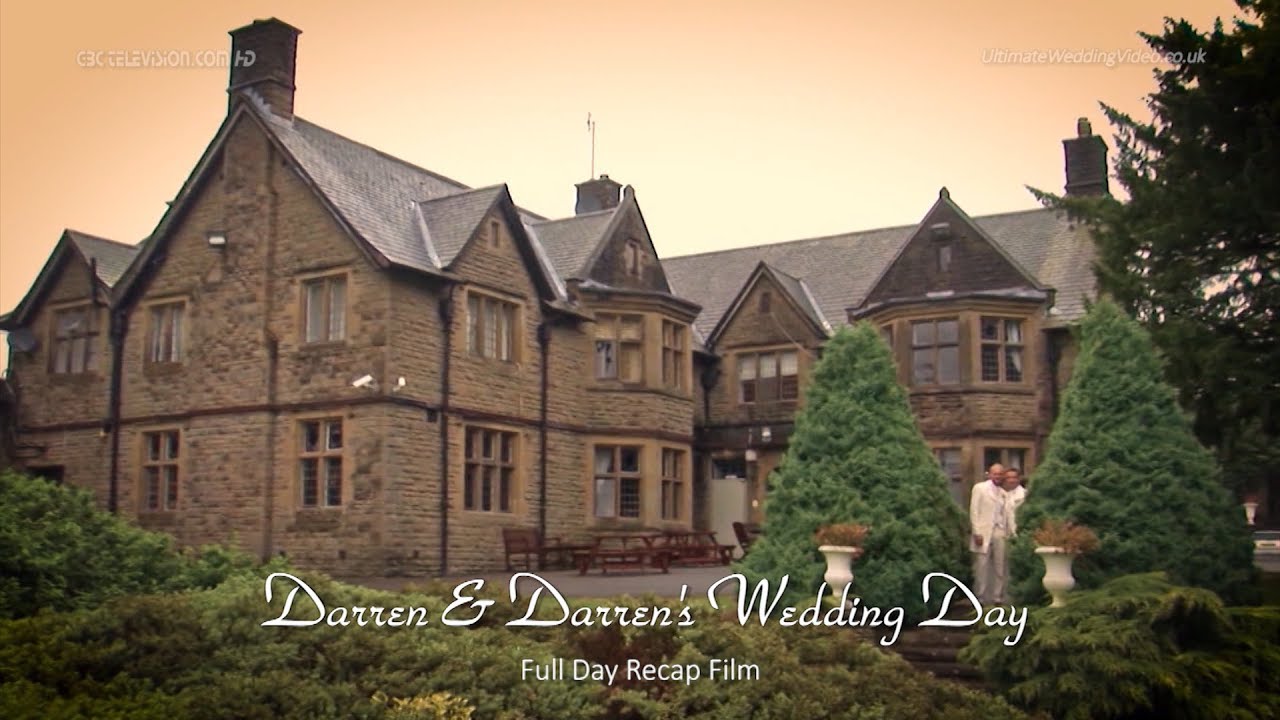 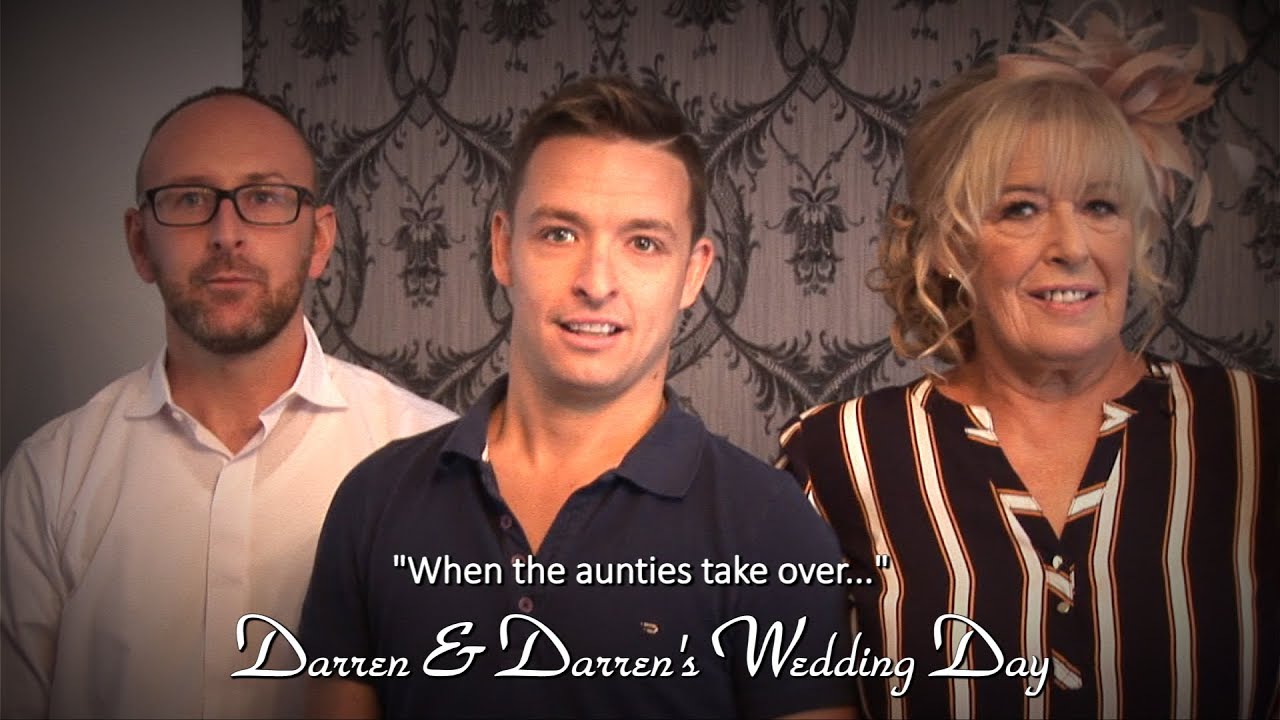 Darren & Darren: The Aunties Take Over! 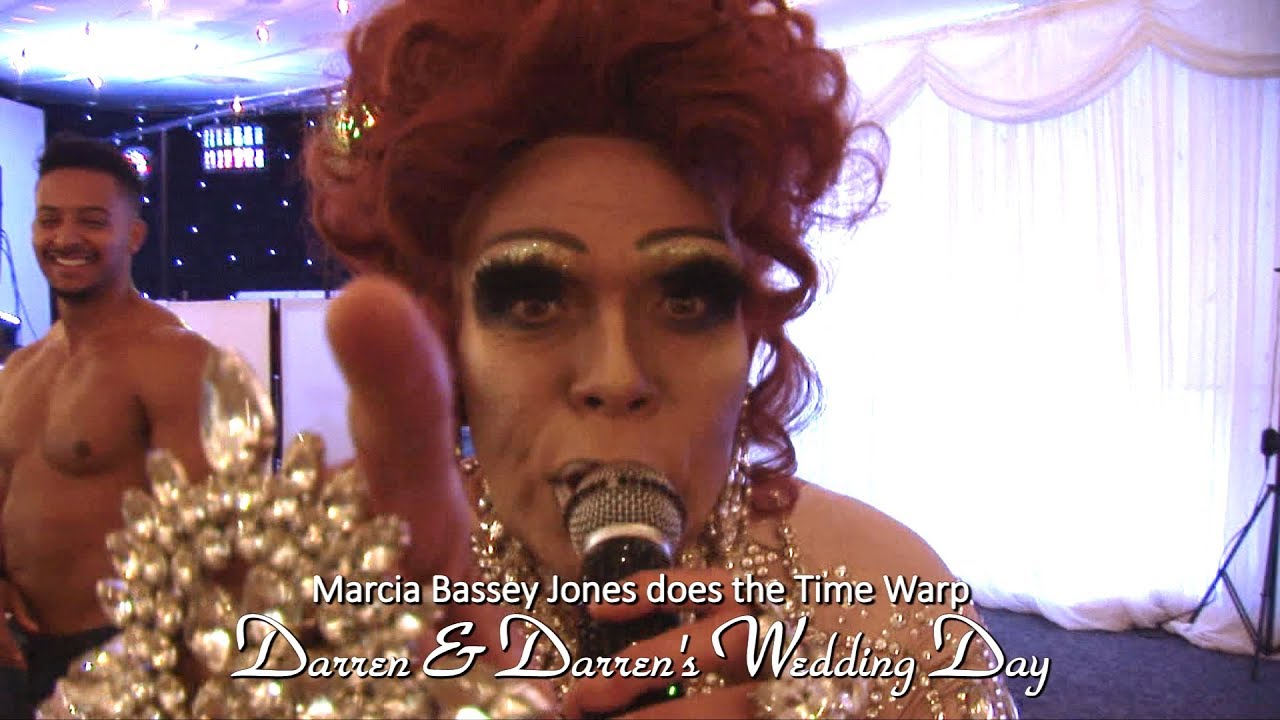 Feeling happy... just recieved our video. We've just got last part to watch. It's fantastic Gareth! Thank you so much!