Lisa and Joe were married at St Bertoline's Church in Barthomley and held the rest of their day at the incredibly beautiful Crewe Hall.

Lisa and Joe's wedding film begins at a misty Crewe Hall as Lisa was getting ready for the big day. With the wedding ceremony a couple of hours away we spend time with Lisa and the girls as they have their hair and makeup done, as Lisa see's her flowers for the first time and we find out what parts of the day everyone is looking forward to.

Taking the button hole flowers for the boys we head off in search of Joe - and find him greeting the guests outside the church.

As the ceremony approaches we listen in on Joe as he prepares to get married and with the Bridesmaids and Lisa arriving outside very soon it is time for them to be married.

The inside of the church is shown off to it's best with our different camera angles - and the ceremony itself looks amazing on film.

Once married Lisa & Joe walk up the aisle and are greeted by their friends and family outside. After the "confetti shot" and a glass of champagne it's off to Crewe Hall for the rest of the day.

As they arrive in their open topped car the sun is beaming down with hardly a cloud in the sky. After spending time with their guests everyone heads inside for the wedding breakfast.

This is where the fun starts!!!

The room manager and one of the trainee waiters were moaning about eachother to the guests during the meal, causing frustration... and with this various guests tension levels began to increase.

With the dessert course due the trainee waiter carrying a full tray of items for the desserts tripped in front of the top table, sending everything on the tray flying into the air. Almost imediately the room manager shouted at him to get up, causing various guests who were already wound up to stand, ready to stop the manager from verbally attacking the trainee waiter. The Waiter announced that he was quitting his job and stormed out of the room, with the Manager then trying to pacify the guests, saying that the trainee's behaviour had been disgusting... just as things could have turned a lot worse, music started and the trainee waiter re-appeared and along with the manager broke into song .... they were NOT members of the Crewe Hall staff, Lisa and Joe had booked the incredible Singing Waiters from YourSingingWaiters.com to "entertain" their guests ... pusing buttons that shouldn't be pushed, winding people up and then after the trip and shouting ... turning feelings and emotions on their heads by their amazing show.

Simply brilliant. There's NO other way of describing this sequence on their film.

Part two of their film begins with the speeches from the Father of the Bride, The Best Man and the Groom and these are followed by a series of messages from their friends and family. After some footage of the afternoon photoshoot Lisa and Joe talk about their day and about their filming experience... and then it is time for the First Dance, Cake Cut and their evening function - including an impromptu karaoke performance from their best man.

An INCREDIBLE day to be part of, a brilliant couple and an AMAZING Ultimate Wedding Film.

It also has to be said ... the Singing Waiters segment of their film is one of the ALL TIME TOP THREE events that I have EVER filmed. Just incredible. 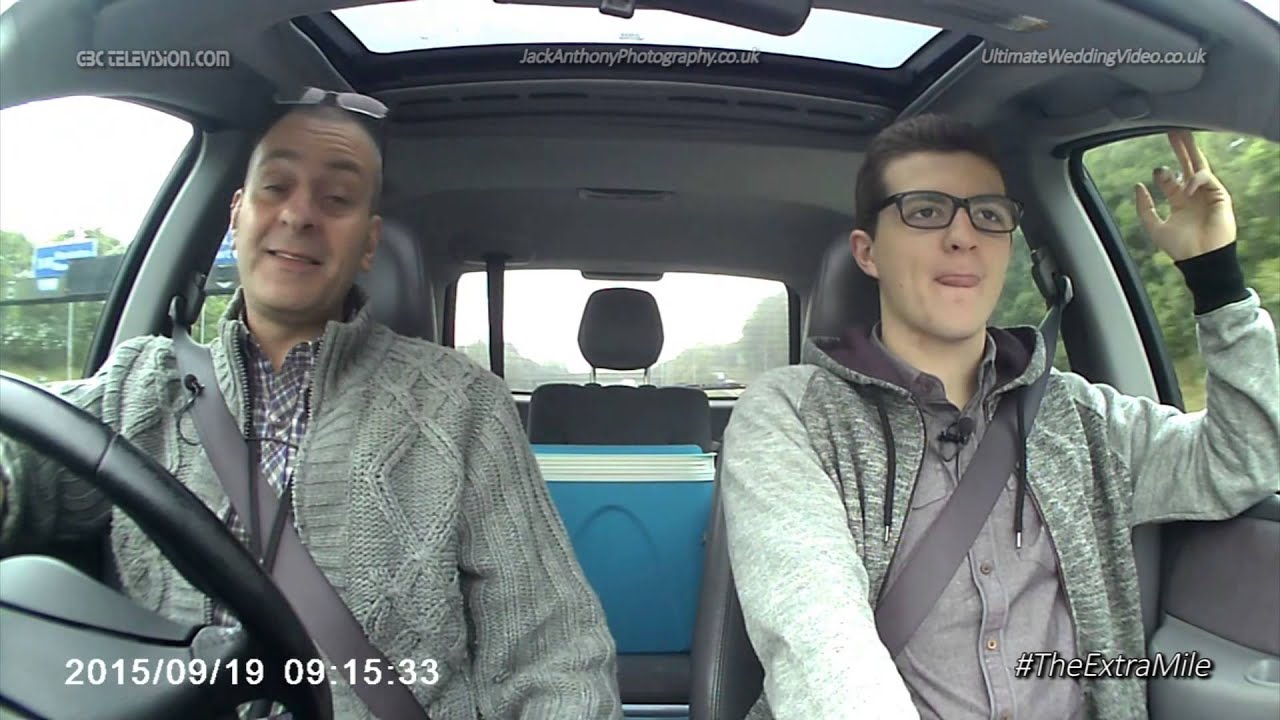 Gareth took Lisa and Joe's film to their Prestatyn Holiday Home so they could watch it for the first time.

During the opening titles Lisa was in tears!

Throughout both part one and two of their film they were both transfixed by it, laughing, joking and smiling as they relived their special day.

On their film Lisa says that she is SO glad that she had us filming ... otherwise there would be no memories of their vows, of their singing waiters and of their day.

After the film had finished they were BOTH full of praise for the film, Joe said 'Here's the crunch. I KNEW it was going to be good, from the effort that was put in on the day ... you never stopped running around ... and from the dedication you show on the editing side of things ... but the DETAIL, the THOUGHT, the CARE that has gone into the film, the closeups of the rings going on, the detail in the 'Signing the Register' segment ... I knew it was going to be good but the film far exceeds my expectations. It's just amazing. It's like a proper film!!'